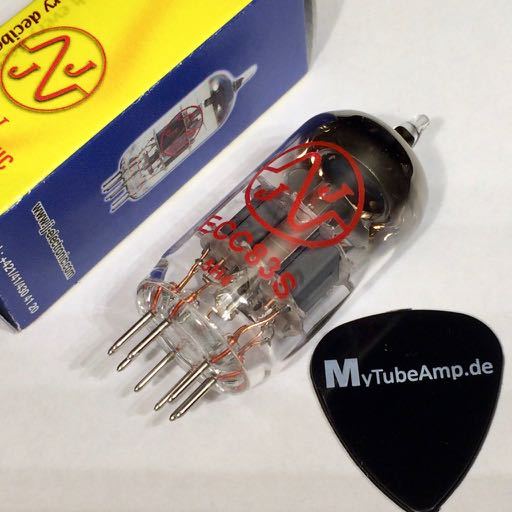 The ECC83S is a very good and robust pre-amp tube with higher amplification, best response and excellent sound. It is suitable as a spare part for any common ECC83, 12AX7 or 7025 tube.

The ECC83S is a double triode. There are 2 amplifier stages in one tube.

ECC83 is the European description, 12AX7 American and 7025 is the name of the military. So it's always the same tube. Behind the name 12AX7 you often find names such as a, C, WA, WB, TT, eh, LPs etc. These are informations from different manufacturers and dealers. Our ECC83S from JJ electronic can be used instead of any of these types.

Since we have been working with tubes for a long time, we have also tested many different preamp tubes from all possible price regions. There is often a huge hype about how big the tonal differences are. But if you compare some of the tubes, you will find that the differences are usually minimal. Mostly one little change at the Equalizer has the same effect.

Installing another pickups in the guitar or building another speaker into the box will bring much more tonal improvements than replacing tubes. If a tube is exhausted and tonal at the end, a replacement will bring a lot, but then it may also be a cheap one.

When does a tube needs to be changed?

Preamp tubes can work very long. Definitely much longer than power amplifier tubes. Pre-amp tubes do not wear out as quickly as power amplifier tubes, as they have to perform far less. If you have many live concerts you will have to change the tubes much earlier than someone who has his amplifier only in the living room.

Mechanical loads and transports are stressful for a tube. Even if the tube still works, the sound will be left after many years. In the course of time, some tubes will also get microphonically. The filaments in the tubes do not always shine equally bright, which does not say anything about the function of the tube.

So, when a tubes filament glows slightly weaker, it doesn´t mean that the tube is at the end.

We are also offering balance pre amp tubes. Just have a look on our overview page.